“The corrected lore of a famous philanthropist” is a story about a very well-known festive character and his epic battle with his nemeses Krampus. Forget what you think you know about this so-called jolly man. The fairy tale stories are wrong, the movies, even your parents- all wrong, and just plain boring.

Dustin Perry is a determined man that has done everything possible to increase funding for paediatric brain cancer. Following the unsuccessful treatment of his daughter, Chloe, who was diagnosed with brain cancer in 2013, Dustin wrote to then Prime Minister (April 2017), Malcolm Turnbull regarding the low survival rates of brain cancer and the lack of effort and funding by the government. The letter was published in The Australian and soon went viral, then after meeting with Malcolm Turnbull and the Minister for Health Greg Hunt, a brain cancer roundtable meeting followed. This resulted in the launch of the Australian Brain Cancer Mission in October 2017. Dustin’s sheer determination also led to the Federal Government co-funding RCDF’s AIM Brain initiative. Dustin is a member of the Strategic Advisory Committee for ABCM at Cancer Australia. He’s currently working alongside the Minister for Health, Liz and many others in increasing funding for The Australian and New Zealand Children’s Haematology/Oncology Group (ANZCHOG).

With the release of his book, Dustin has decided to donate all authors’ royalties to the RCD Foundation for the whole month of November.

The corrected lore of a famous philanthropist

Meet a Santa character that you don’t dare to describe as fat, potbellied, or the owner of a cute button nose. He is a savage warrior with muscles on his muscles, tattoos covering his thick limbs, and a sword at his hip that neither you nor I could lift.  This story of the real Santa tells of the big man who fought to protect us all, with help from his friends the elves, all long before finding himself the manager of the gift delivery service. This small band of warriors have dedicated their lives to keeping us all safe and maintaining peace around the world. 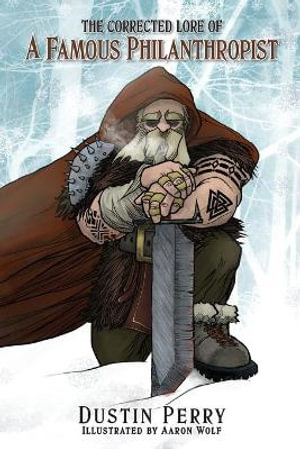