Over the last few months Zoe has undergone countless treatments including radiotherapy (for the brain and spine), MRI scans under general anaesthetic, several surgeries, and chemotherapy tablets every day.

It’s something no child should ever endure and is made even harder by a prognosis that the treatment she’s receiving may only prolong her short life.

Zoe’s diagnosis came just 12 months after her mum Penny had her own battle with breast cancer. Penny’s treatment options were greater, and successful thanks to large investment into breast cancer research.

Penny said it seems so unfair that while she could be treated for breast cancer, Zoe has been given almost no hope of becoming a happy little girl and growing up to do whatever she dreams of.

“In just three months my husband and I have had to make decisions that no parent should ever have to make,” she said.

“I can’t describe in words what we as parents feel every day, besides feeling worried, anxious, fearful and heartbroken.”

But the Stanley family is strong, and since Zoe’s diagnosis, has been campaigning for better brain cancer research and funding.

Penny, Zoe’s father Clint, their family and local community have come together to support Zoe and raise much-needed funds for brain cancer research.

Through a massive Instagram auction and fundraising events the Stanley’s (a.k.a the United Unicorns) raised an incredible $54,505 for Connor’s Run on September 18.

The beautiful Penny and her family and friends joined Liz and Scott on stage at the finish line to present the check, which will fund critical brain cancer research. 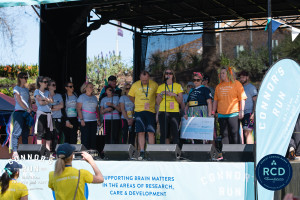 Liz said it was an honour to have the Stanley’s at Connor’s Run.

“Despite what their family is going through, they’ve channeled their energy into making a real difference to brain cancer research,” she said.

“Penny’s dedication to funding research and changing the future of brain cancer to ensure no other family has to go through what little Zoe has is inspiring.

“She has turned an awful experience into something so powerful and we’re honoured to be able to help and lead the fight against paediatric brain tumours in Australia.”