Since receiving a shock diagnosis of their daughter Olivia’s ependymoma in January 2017, the Singapore-based Phelan family sprang into action, beginning a drive to support brain tumour research and funding at home.

Thanks to their incredible hard work and generosity the Phelan family has raised a massive $51,000 for the Robert Connor Dawes Foundation, to support our research teams and facilities, in particular the AIM BRAIN Project that formed a crucial part of Olivia’s treatment.

Within 24 hours of a CT scan Olivia underwent major surgery to remove the tumour, which unfortunately could not be removed entirely.

Thankfully, Olivia was being treated by Melbourne oncologist Jordan Hansford, a member of the AIM BRAIN Project that provides immediate access to molecular profiling platforms currently only available in Germany.

Thanks to AIM, Olivia and her family were able to rapidly access the best and most accurate diagnostic information about her tumour – allowing her oncologist to make the most-informed treatment decisions and optimise Olivia’s recovery.

Dad Martin said they felt so fortunate to have been at home in Melbourne during Olivia’s diagnosis and have access to this cutting-edge global research team.

“I knew we needed to continue the support of this research so we decided to organise A Ride Around the Island for Olivia,” he said.

Just a few months later on March 18 2017, more than 40 local cyclists, ANZA Cycling friends and colleagues took part in a 128km bicycle ride around the perimeter of Singapore. 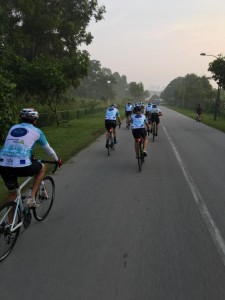 The ride was organised so as to arrive in time for a massive fundraiser at Olivia’s Singaporean school – the Australian International School (AIS) – where over 50 people had their heads shaved in front of a noisy crowd of AIS Sharks basketballers, took part in an auction and raffle.

“We were overwhelmed by the support we received for Olivia and the RCD Foundation, and we can’t begin to thank the amazing generosity of our friends and colleagues – new and old, near and far, and total strangers.

“We’re so thankful to everyone who supported and donated in any way, shape or form. We had great support without hesitation from the moment the event was conceived, including from the cycling jersey sponsors (Dimension Data, BPL Global, Aspen Insurance, Australian International School, Commonwealth Bank, Spotlight Stores, Lloyd’s of London), Hilton Hotels and Jermyn Street Barbers crew who shut up shop just to help us shave all those heads!”

What an incredible feat, go Phelans!

More about the project